Swiss law enforcement arrested FIFA officials on May 27 in Zurich at the Baur au Lac hotel on federal corruption charges that include racketeering, money laundering and wire fraud.

Matt Apuzzo, Stephanie Clifford and William K. Rashbaum of the New York Times reported the news, indicating the FIFA officials will be extradited to the United States to be charged. Two separate investigations will be carried out—one by Swiss officials, the other by American—after Wednesday’s developments.

FIFA President Sepp Blatter cancelled a public appearance in light of the news, reported by Rob Harris of the Associated Press: “Blatter cancels speech at FIFA medical event. FIFA medical chief (Jiri) Dvorak says due to ‘the turbulence’ & he has to ‘manage the situation.'”

Paul Kelso of Sky News reported that Blatter instead called an assembly with world football’s most important officials: “Blatter convened emergency meetings at FIFA house this morning with Confederation chiefs including Michel Platini.”

The latest developments come at a time when real pressure is building on Blatter, although he retains a powerful ally. In April, Blatter told news agency TASS (h/t Aaron Flanagan of the Mirror) that Russia would host the “best ever” World Cup, and on Thursday, Russian President Vladimir Putin made it clear he believes the U.S. authorities have no right to investigate FIFA.

Ben Smith of BBC Sport tweeted the following quote from Putin: “It has got nothing to do with the USA.”

A further Smith tweet noted Putin adding: “It’s another attempt by USA to spread its jurisdiction to other states … to prevent Mr Blatter to be re-elected as president.”

FIFA released an official statement on its website, detailing the two concurrent investigations:

Firstly, the arrest of six individuals this morning in Zurich concerns investigations by the US Attorney’s Office for the Eastern District of the State of New York. The Swiss authorities, acting on behalf of their US counterparts, arrested the individuals for activities carried out in relation with CONCACAF and CONMEBOL business.

The second instance follows FIFA’s initiative of presenting the file on the 2018/2022 FIFA World Cup™ bidding process to the Swiss Office of the Attorney General in November 2014. The authorities are taking the opportunity of the FIFA Congress to interview those FIFA Executive Committee members who are not Swiss residents who voted back in 2010 and are still in office.

The statement notes FIFA is “fully cooperating” and is “supporting the collection of evidence.” It concludes: “We are pleased to see that the investigation is being energetically pursued for the good of football and believe that it will help to reinforce measures that FIFA has already taken.”

CONCACAF released a statement on the matter as well:

The Confederation of North, Central America and the Caribbean Association Football (CONCACAF) is deeply concerned by today’s developments, in the arrest of several international football officials including those belonging to our Confederation.

The Confederation will continue to cooperate with the authorities to its fullest capacity.

At present, CONCACAF is not in a position to comment further on the specific allegations, which have been referred to the appropriate legal counsel through the pertinent channels.

CONCACAF continues to operate in the ordinary course of business, hosting all of its upcoming tournaments in a successful and timely manner, including the 2015 CONCACAF Gold Cup.

Following the arrests, U.S. Soccer commented on its website:

The United States Soccer Federation firmly believes there is no higher priority, and nothing more important, than protecting the integrity of our game. We are committed to the highest ethical standards and business practices, and we will continue to encourage CONCACAF and FIFA to promote the same values. Out of respect for the ongoing investigation, we will not speculate or comment further on this matter at this time.

As reported in the aforementioned New York Times article, the FBI-backed U.S. investigation relates to “bids for World Cups as well as marketing and broadcast deals, according to three law enforcement officials with direct knowledge of the case.”

Many have questioned the lack of transparency around the bidding processes for the 2018 and 2022 World Cups, to be held in Russia and Qatar, respectively.

The Office of the Attorney General of Switzerland released a statement on how the two investigations will be carried out:

For reasons of criminal procedure (principle of proportionality), the procedure coordinated with the requested acts of the U.S. authorities was designed in such a way as to allow the procurement of any criminally relevant data in an effective manner, and to avoid any possible collusion. These measures were carried out simultaneously as a large number of persons involved in allocating the World Cups were currently in Zurich.

These legal actions concern two criminal procedures conducted separately by the OAG and the US Attorney’s Office for the Eastern District of New York. The Swiss and US law enforcement authorities are not conducting any joint investigations, but are coordinating their respective criminal proceedings.

Former FIFA official and Trinidad and Tobago native Warner has turned himself in to police, according to ABC News (via Fox Soccer).

Prior to Warner’s surrender, Ben Burrows of the Mirror provided comments from the 72-year-old who maintained his innocence:

I have fought fearlessly against all forms of injustice and corruption.

I have been afforded no due process and I have not even been questioned in this matter. I reiterate that I am innocent of any charges. I have walked away from the politics of world football to immerse myself in the improvement of lives in this country where I shall, God willing, die.

Khamal Ethan Georges of CNC3TV reported that Warner will be spending the night in jail after his attorneys were unable to get a court hearing.

Harris noted that the Swiss justice ministry said that six of the seven arrested oppose extradition to the United States.

The New York Times‘ coverage indicates alongside footballing officials, the charges will be brought against sports-marketing executives based in the U.S. and South America. It is reported such figures are accused of paying in excess of $150 million in bribes to secure media campaigns for major tournaments within football.

What made the arrests feasible in the first place is the treaty between the U.S. and Switzerland. Per the New York Times report, the treaty states the Swiss agree to hand over people staying in their country for prosecution in the U.S. on matters of general criminal law. 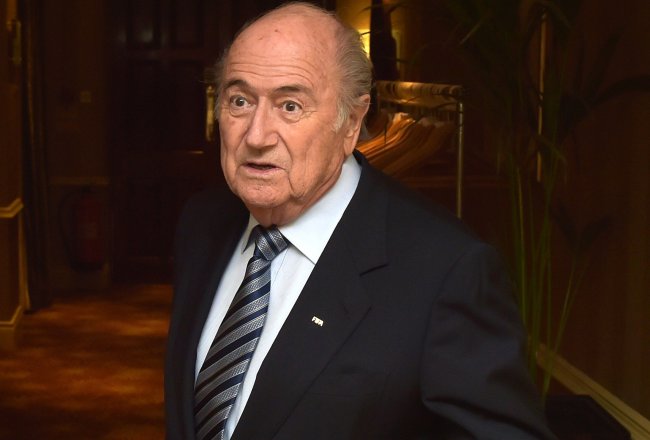 Based on that understanding, it appears the FIFA officials will indeed be charged and tried in the U.S. FIFA has been shrouded in secrecyand seen as a mostly unchecked, powerful governing body that presides over the world’s most popular sport.

While these arrests are certainly an unwelcome distraction for Blatter, who’s up for re-election on Friday, CNN’s Eliott C. McLaughlin and Greg Botelho note that it could be worse, stating, “Blatter is not one of those arrested or facing charges by U.S. authorities, but he was among those investigated.”

Despite that, Sky Sports News HQ reported that Blatter and other Swiss internationals working for FIFA were told that they can’t leave Switzerland until further notice.

Blatter also issued a statement through FIFA on the day’s events:

This is a difficult time for football, the fans and for FIFA as an organisation. We understand the disappointment that many have expressed and I know that the events of today will impact the way in which many people view us.

As unfortunate as these events are, it should be clear that we welcome the actions and the investigations by the US and Swiss authorities and believe that it will help to reinforce measures that FIFA has already taken to root out any wrongdoing in football.

While there will be many who are frustrated with the pace of change, I would like to stress the actions that we have taken and will continue to take. In fact, today’s action by the Swiss Office of the Attorney General was set in motion when we submitted a dossier to the Swiss authorities late last year.

Let me be clear: such misconduct has no place in football and we will ensure that those who engage in it are put out of the game. Following the events of today, the independent Ethics Committee – which is in the midst of its own proceedings regarding the awarding of the 2018 and 2022 FIFA World Cups — took swift action to provisionally ban those individuals named by the authorities from any football-related activities at the national and international level. These actions are on top of similar steps that FIFA has taken over the past year to exclude any members who violate our own Code of Ethics.

We will continue to work with the relevant authorities and we will work vigorously within FIFA in order to root out any misconduct, to regain your trust and ensure that football worldwide is free from wrongdoing.

Despite plans to proceed with the election, UEFA has called for a postponement in a statement on the situation on its website:

Today’s events are a disaster for FIFA and tarnish the image of football as a whole.

UEFA is deeply shocked and saddened by them.

These events show, once again, that corruption is deeply rooted in FIFA’s culture.

There is a need for the whole of FIFA to be “rebooted” and for a real reform to be carried out.

The upcoming FIFA Congress risks to turn into a farce and therefore the European associations will have to consider carefully if they should even attend this Congress and caution a system, which, if it is not stopped, will ultimately kill football.

The UEFA member associations are meeting tomorrow ahead of the FIFA Congress. At that point, the European associations will decide on what further steps need to be taken to protect the game of football.

In the meantime, the members of the UEFA Executive Committee are convinced that there is a strong need for a change to the leadership of this FIFA and strongly believe that the FIFA Congress should be postponed, with new FIFA presidential elections to be organised within the next six months.